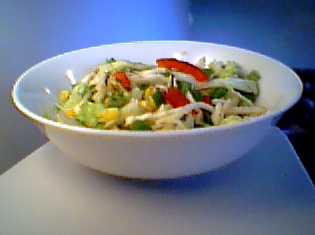 This is easily the most popular dish I’ve created. I served it at every BTR recording session I hosted at Melton Road, and it was always well received.

It evolved out of a coleslaw recipe that my family have in their repertoire, but I’ve long believed a salad was one of those dishes where the combination of ingredients played the major role.

I call it the “Bitzer” Salad because it comprises “bits of” whatever happens to be available.Â A typical ingredient list would include:

…but this is not a hard and fast list - it can be changed however you prefer.

As with most salads, it’s almost literally thrown together. Just combine all the ingredients in a large mixing bowl and stir or toss it into an even mixture.

It doesn’t take long to prepare, but it can be prepared ahead of time and kept in the fridge overnight as long as a liberal pinch of cooking salt is sprinkled over the mixture before it goes into the fridge. The salt absorbs the excess moisture that forms in the meantime.

The clincher to making this recipe work is to go easy on the dressing - it’s only there to hold everything together, it’s not supposed to drown the whole thing. Ideally, the dressing should not be applied until serving, and should only be one tablespoon per serving at most. I created this salad to feature the taste and texture of the vegetables I put into it. Drowning it in dressing defeats that purpose.

Retrieved from "https://btrproductions.fandom.com/wiki/Bitzer_Salad?oldid=4830"
Community content is available under CC-BY-SA unless otherwise noted.