After defeating the Daleks' attempt at destroying London, the Doctor and Chloe feel that a rest on Centurai 7 is just the thing. However, the universe has other plans for the Doctor.

After being dragged off course by an unknown energy beam, the TARDIS materialises on board the space station Sentinel - the place of a top secret military project that only a select few know about.

Whilst scouting around for some replacement parts for the TARDIS, the station comes under attack from an unknown force - a force that both the Doctor and the Captain of Sentinel know of only too well.

Once again, the Doctor must gather his wits in time and discover what alien secrets Sentinel hides...

Part One: The Tardis takes-off, the Doctor and Chloe leaving London behind. The Doctor sets course for Centauri VII.

On the space station Sentinel, Commander Pashley attempts to contact an approaching unidentified ship, without success. Captain Ricketts orders the crew to begin establishing defensive measures, and quietly hopes that whatever business this ship may have with the station does not involve the Drive.

Five minutes out from Centauri VII, alarms begin to sound in the Tardis. A minor course change quickly escalates into the Tardis slipping into a different time vector, then parts of the console begin to explode. The Doctor attempts to repair what initially appears to be a stabiliser failure, but soon discovers that the Tardis is being dragged into an enormous gravitational pull, and in attempting to break free it is beginning to tear itself apart. The Doctor and Chloe shut down the Tardis, riding the gravity well to its source.

The Tardis lands in a storeroom on a space station. The Doctor decides to scout for components to repair the Tardis before speaking with the crew to find out what had created the gravity well. Meanwhile, Captain Ricketts orders the airlocks sealed as the unidentified ship commences docking manoeuvres.

Alerted by the sound of gunfire, the Doctor and Chloe rush to investigate. Near the airlock, they find a boarding party in a firefight with the station’s security squad. The Doctor recognises the wounds on a dead soldier, and tells Chloe that they need to leave immediately. But as they turn to leave, they are confronted by a Cyberman.

Part Two: The Doctor talks his way out of being killed, and he and Chloe are instead taken prisoner – something Chloe is beginning to doubt the Doctor could ever manage to avoid.

Commander Pashley is sceptical that Sentinel is being attacked by Cybermen, which haven’t been sighted in the local system since the Alliance was formed 21 years previously. Captain Ricketts briefly recounts some of the events surrounding the foundation of the Alliance – including a classified report on an attempt by the Cybermen to attack the foundation conference itself using troops being smuggled in aboard a space freighter.

The Doctor is brought before the Cyberleader, who initially doesn’t recognise him. When asked what the Cybermen want with a space station, the Cyberleader tells the Doctor that Sentinel holds the key to the future of the Cyber race. An experimental warp drive has been developed on Sentinel with the capability to open a wormhole between dimensions, and the Cybermen intend to use this device to bring alternate-universe Cybermen into this reality, to increase their own numbers and turn the tide of the ongoing war.

Meanwhile, the Sentinel crew has sustained heavy losses in the Cybermen’s onslaught, and makes a last stand outside the Bridge. A vanguard of four Cybermen is destroyed, but further resistance is soon crushed. The Cybermen take control of the station and activate the wormhole drive. A ship the size of a continent, potentially containing a billion Cybermen, appears through the wormhole, and the Doctor fears the Cybermen have won.

Part Three: The alternate-universe Cybermen board the station, and the present Cybermen begin work on intstalling their conversion equipment.

The Doctor and Captain Ricketts fill Chloe in about the creation of the Cybermen, and the present state of the war. With too many Cybermen on the station for the Doctor to deal with on his own, he decides that they should flee the station and notify the authorities. The Doctor overpowers a Cyberman using his sonic screwdriver, and the group escapes.

The two groups of Cybermen prove incompatible, the alternate-universe Cybermen destroying the present Cybermen and taking over. They begin to advance their own plan to bring more of their own kind through the wormhole, mounting a full-scale invasion.

The Doctor and his friends stumble upon the Cybermen’s conversion machinery, now up and running, and they find three of the remaining crew undergoing conversion. They are able to speak with one of them, Corporal Tiller, who tells them of the alternate-universe Cybermen’s takeover. The Doctor realises the wormhole drive must be destroyed. Corporal Tiller cannot be saved from conversion, and Captain Ricketts orders the others out of the room...

Meanwhile, the alternate-universe Cybermen prepare to reopen the wormhole.

Part Four: Back at the Tardis, the Doctor hands out bags of gold dust to the others before they proceed to the station’s power core.

They find two Cybermen guarding the power core, which Captain Ricketts and Commander Pashley take on while the Doctor and Chloe work on disabling the wormhole drive. The captain is killed in the scuffle.

The Doctor decides the quickest course of action is to destroy the entire station. He overloads the power core, and everyone on board flees before the station explodes.

With the destruction of Sentinel, the remaining alternate-universe Cybermen are cut-off from their fleet and their home dimension. Yet their Controller is adamant, “We will survive”.

The Doctor and Chloe decide they need a rest, and the Doctor also wants to make some additional repairs to the Tardis. Following the old adage that lightning never strikes twice in the same place, he decides to take Chloe to see the Illuminations, and sets course for – 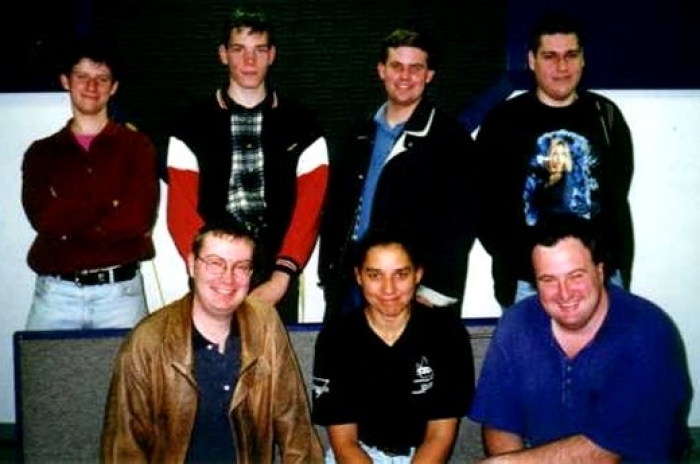 Matthew: As the second of the original double-set of stories I had prepped and planned for during 1998, Sentinel certainly comes out as the stronger of the two. A lot had been learnt during the production of The Invasion of the Daleks, and some noticeable improvements occurred with this release - a much more professional sounding dialogue track came about thanks to a recording session at the School of Audio Engineering in June 1999 (more on that, though, later), a much richer set of sound effects thanks to an excellent computer game I was playing at the time, and a tighter script thanks to the involvement of newly appointed BTR Script Editor (later Story Editor) Witold Tietze, the man who would go on to be one of the biggest reasons why the BTR releases were so good.

Despite these improvements, however, there were still some very rough aspects present in the serial. The aforementioned professional recording studio did give things a boost, but sadly due to a mastering error the second half of the material was down-mixed at the wrong rate, resulting in a slowing (and lowering pitch) to the actor's voices as the dialogue progressed. Sadly, my limited knowledge was unable to fix it in 1999, and unless I can ever find the master CD of the tracks, no "Special Edition" could be released until such time. Something to put on the bucket list of things to do, I guess. But this dialogue glitch makes the serial almost comedic at times.

Secondly, the plot was again fairly wafer thin, although this time the wafer had certainly gained some weight since The Invasion of the Daleks. While the comparisons to the TV story Earthshock are easy to make, I had tried to take things in a different direction, with a desire to basically reset the Cybermen presence in the Whoniverse. I had, like a lot of fans, been unimpressed at how weak the Cybermen had become over the 1980s. I wanted to restore them to their 1960s glory, including voice, visual look (a funny goal to have for an audio drama!), and lack of resistance to gold, arrows, bullets, and basically anything else that might hurt them. I think we succeeded on this level, and it does amuse me to think that in 2006 the TV series did something very similar to what we did in 1999. The involvement of Witold was a huge benefit to this story, as we both loved the Cybermen hugely.

Overall, Sentinel was a definite step forward for BTR - although the best was still to come. Stronger scripts, stronger performances, and stronger post-production were all just around the corner. (2/10)

Retrieved from "https://btrproductions.fandom.com/wiki/Sentinel?oldid=4435"
Community content is available under CC-BY-SA unless otherwise noted.