From the moment an explosion destroys the Green Park Underground Railway Station, the Doctor and Chloe are thrown into the evil world of the Daleks.

The Daleks have issued Earth authorities with an ultimatum - help them escape Earth, or London will be destroyed.

However, the Doctor knows the Daleks of old, and somehow feels that this Dalek ship at the bottom of the lake is there because of more than a damaged engine, and behind the entire scheme is someone whom the Doctor has fought many times before.

The Doctor will need all of his wits, and with Chloe's help, must thwart the Daleks plan, before all of London is destroyed...

Part One: Two Council workers find a strange electronic device in the sewers somewhere under London. They are confronted by a Dalek, which exterminates them.

Meanwhile, the Doctor and Chloe have been taking time out at a jazz concert. On the way to catch a train to return to the Tardis, the Doctor tells Chloe of a miscreant he once knew named Sidgin Theta, and is annoyed not only by Chloe empathising with Sidgin’s plight, but also by the delayed trains. An announcement on the station’s PA system advising passengers to evacuate the station due to an emergency comes too late for the Doctor and Chloe, who are caught in the explosion as a bomb detonates inside the station.

When the smoke clears, the Doctor and Chloe find themselves trapped in a maintenance tunnel. Exploring the tunnel, they find a door hidden under a stack of sandbags. The Doctor opens the door with his sonic screwdriver, and they find a Dalek on the other side...

Chloe regains consciousness outside the train station, and realises that the Doctor is trapped underground. She reports this to the emergency services, and Colonel Trent, the on-site commander, leads a rescue team down into the station. Chloe guides them to the tunnel, and they locate the door, which this time has to be cut open. The room beyond is empty – the Doctor’s gone.

Part Two: Colonel Trent accuses Chloe of making up a hoax, but she is able to prove her story by finding the Doctor’s torch, and also a strange disc in her pocket that she does not recognise. Colonel Trent identifies the disc as a Dalek message plate, and decides that the message contained on the disc must be decoded and dealt with first.

The Doctor has been taken to a Dalek ship, where he again meets an old adversary: Davros, the Emperor of the Daleks. According to Davros, the ship was damaged in a battle, and crashed on Earth. The Daleks have placed explosives throughout the Underground system, that will be detonated if replacement engine parts are not provided.

The Daleks’ demands form the content of the message plate, which Colonel Trent plays during a COBRA meeting called to manage the government’s response to the impending crisis. The Prime Minister explains the situation to Chloe, and asks for her help.

Davros rejects out of hand the Doctor’s offers of assistance, and orders the countdown to start. With no sign of Chloe at the appointed meeting-place as the clock winds down, Davros orders his Daleks to detonate the bombs...

Part Three: The Doctor spots Chloe on the viewscreen in the nick of time, and Davros cancels the detonation. A Dalek is sent to the meeting-place to communicate further demands.

As the BBC News reports on the evacuation of Central London, the Dalek ship is dragged out of the Serpentine and the necessary parts are quickly delivered. Chloe is permitted to visit the Doctor in a cell on-board the ship, and he secretly gives her another message plate listing the locations of the bombs. The Doctor also reveals that the bombs are remote-controlled, and the Daleks intend to detonate them regardless once they have reached Earth orbit.

Chloe passes this information along to Colonel Trent, who orders the Bomb Squad into action with only two hours to find and neutralise the bombs. Five of the six charges are soon found, and Major Tarrant, the head of the Bomb Squad, reports that the bombs are made of a magnetic casing, and appear to contain a device that would detonate the bomb if it were tampered with.

The final charge is retrieved with only five minutes remaining, and Colonel Trent reluctantly orders in an air strike to destroy the Dalek ship before it can lift off. Before anyone can act, Chloe snatches up the bombs and runs for the ship.

The Daleks release the Doctor as their ship begins to lift off. The ship ascends quickly towards the heavens, then suddenly explodes in mid-air.

Chloe later explains that she fixed the bombs by their magnetic casings to the hull of the ship while rescuing the Doctor. With the crisis over, the Doctor and Chloe make their goodbyes and head off to catch another train back to the Tardis. 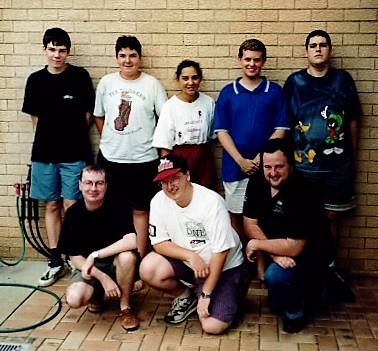 Matthew: It is an easy thing to say that the only way up was from here! Inspired throughout 1998 by the audio adventures released online by FloorTen, not to mention my past attempts at creating Doctor Who audio adventures in the early 1990s, it would be an understatement to say that I was eager to produce my own series of adventures for my own Doctor. The original plan had been to produce this as a Seventh Doctor & Ace adventure, before turning into an original Doctor and companion combination. This was down to my desire to produce more than one story, which at the time was envisaged as a trilogy of stories featuring the Daleks, the Cybermen, and the Master (again, you can see the FloorTen influence here on my young mind!).

This actual story had a fairly extended genesis, with scripting (such as it is, given that the majority of the plot and dialogue is lifted from a Terry Nation short story) occurring throughout 1997 / 1998, and the recording session taking around 6 hours on a fairly energetic Saturday afternoon. It's amazing to look back at that session, and how rudimentary the entire setup was. A microphone (the same microphone, as owned by David "Runcible" Hutchison, which was used on every single BTR audio adventure excluding Renegade's Ball) plugged into a CD player which had a karaoke feature, which itself was outputted to the Line in socket on an old 16-bit SoundBlaster sound card, on a rather slow 486 Windows 95 PC (even for 1998, this was quite old hardware), it's amazing to think we managed to record this thing at all.

But really I guess this all gets to the heart of what made this story so special, and what was sadly lost on virtually the entire Internet when they downloaded the episodes. Sure, the post-production is very rough (there was no multi-track audio editing in those days for a low-end home PC, so the entirety of the serial was produced in a destructive editing environment), the acting is hardly up to standard (almost everyone involved were non-actors), and yeah, for sure - the script is a very thin piece of work with plot holes you could drive a truck through. But here's the thing - everyone involved had a huge amount of fun making it, long-term friendships were formed, and a lot was learnt about how to produce a successful audio drama. If The Invasion of the Daleks had not posessed this crucial element, it's fair to say that everything that came after The Gallifreyan Recommencement would never have happened.

And, really, that is what makes The Invasion of the Daleks a winner. Even if it does suck as a final product. (1/10)

Retrieved from "https://btrproductions.fandom.com/wiki/The_Invasion_of_the_Daleks?oldid=4360"
Community content is available under CC-BY-SA unless otherwise noted.